It was in March of 2015, when a well established breeder, Anna Stillions out of North Carolina, was in the market for adding another breed to her breeding program of over 15 years when she came across a super cute puppy she had never seen before, a "Malkie" according to the breeder she acquired it from, she named "Sundae". Sundae a female pup reminded Anna of an ice cream sundae with her interesting coat color. Sundae (pictured below) was a uniquely colored Black Malkie with splotches of White and Tan with Tan/Gold points - over her eyes, her ears, her cheeks, her lower legs and under her tail (similar tan points to a Yorkshire Terrier). Anna found this puppy to be exceptionally intelligent, super sweet, gentle-natured and very low-shedding which was a delight, as she suffers from allergies. 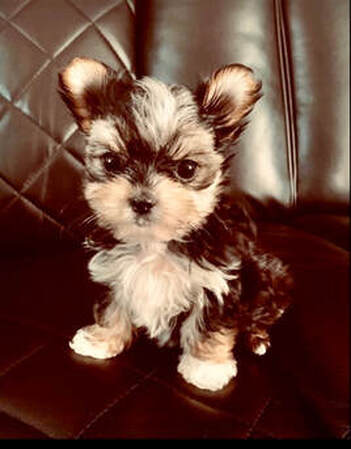 "Sundae" 2015- Morkshire Terrier aka "Malkie" owned by the founder of AMTC.
Anna immediately went in search for dog clubs and registries to join, as she is an "Cynophilist" (a dog fancier), in hopes to register her beloved find. To her surprise, discovery, and disappointment there were NO dog Club's and there were NO dog Registry's for this breed of dog. She also found that this breed of dog did not have an 'official' breed name. Inspired by her love and commitment to dogs and this breed, she took several weeks-to-months doing extensive research about, "Where this dog breed originated from?"

Anna found that this breed originated in America and was originally referred to as the "Morkshire Terrier" when this breed first emerged in the 1970s. It was after her extensive research here in the U.S. that led her to search around the world, that she decided that this breed "Needed" to be Acknowledged and Recognized. Anna first contacted several U.S. Registries to inquire and obtain guidance in starting and incorporating a Registry for this dog breed.

Shortly after MHR was established, it took off with quite a number of pet owners registering their pets, and with the rise in pets registering with MHR, Anna decided to contact several U.S. Club's to inquire and obtain guidance in incorporating the First dog Club for this breed. Because this breed had NO Official Breed Name and it originated in the United States of America, Anna decided to give this breed a proper name, the "American Morkshire Terrier" by keeping the original name of the breed, "Morkshire Terrier" and accentuating the origin of this breed with "American." 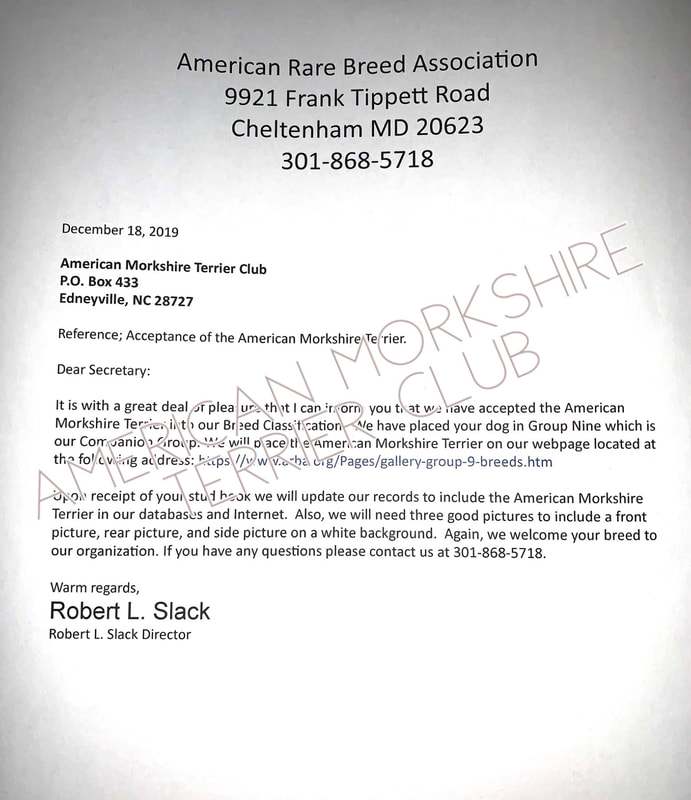