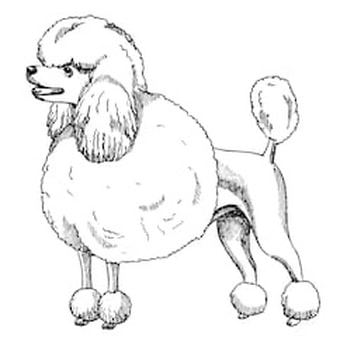 Color: The coat is an even and solid color at the skin. In blues, grays, silvers, browns, cafe-au- laits, apricots and creams the coat may show varying shades of the same color. This is frequently present in the somewhat darker feathering of the ears and in the tipping of the ruff. While clear colors are definitely preferred, such natural variation in the shading of the coat is not to be considered a fault. Brown and cafe-au-lait Poodles have liver-colored noses, eye-rims and lips, dark toenails and dark amber eyes. Black, blue, gray, silver, cream and white Poodles have black noses, eye-rims and lips, black or self colored toenails and very dark eyes. In the apricots while the foregoing coloring is preferred, liver-colored noses, eye-rims and lips, and amber eyes are permitted but are not desirable. Major fault: color of nose, lips and eye-rims incomplete, or of wrong color for color of dog. Parti-colored dogs shall be disqualified. The coat of a parti-colored dog is not an even solid color at the skin but is of two or more colors.
Gait: A straightforward trot with light springy action and strong hindquarters drive. Head and tail carried up. Sound effortless movement is essential.

Temperament: Carrying himself proudly, very active, intelligent, the Poodle has about him an air of distinction and dignity peculiar to himself. Major fault: shyness or sharpness.
Major Faults: Any distinct deviation from the desired characteristics described in the Breed Standard.

©2019 American Morkshire Terrier Club® Inc. All rights reserved.
​*This material may not be published, rewritten, or redistributed. Unauthorized use is prohibited and protected by exclusive rights.